Will Rubio fight for conservative principles?

Unlike Ted Cruz, Rubio does not support amending the U.S. Constitution to protect traditional marriage. 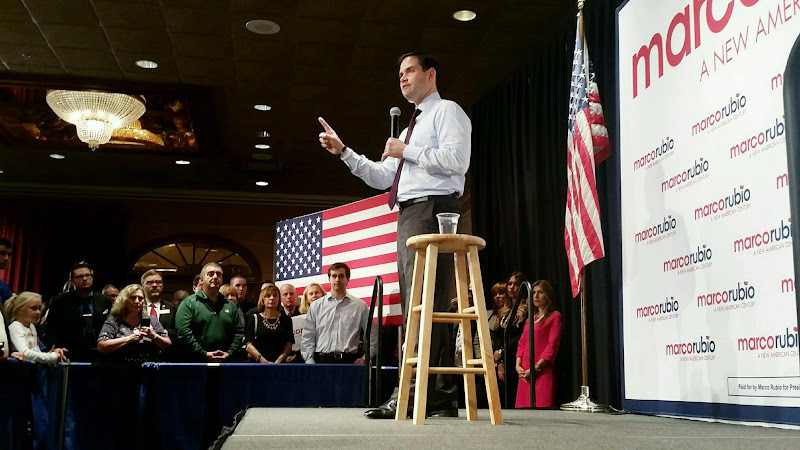 I have written numerous laudatory columns about Marco Rubio, the young Republican senator from Florida, now a serious presidential contender. It is not hard to get enthusiastic about Rubio. He radiates star quality and seems to hold promise as the kind of new conservative leader we seek.

And yet, nagging doubts persist about whether he is indeed that totally committed conservative warrior, ready to fight the very tough fight to get America back on track.

Doubts about this began in 2013, when he joined with seven other senators (three other Republicans and four liberal Democrats) to form the "Gang of Eight," who crafted immigration reform legislation that would grant amnesty to illegal immigrants.

And now there's a new reason to wonder if it is safe to put our conservative eggs in Rubio's basket: billionaire political activist Paul Singer's recent announcement that Rubio is his candidate.

Questions and concerns arise because Singer is an aggressive gay rights and same-sex marriage activist. It is Singer's millions that are credited with playing the decisive role in getting same-sex marriage legalized in New York state. He is the founder of American Unity PAC, which supports Republicans who endorse same-sex marriage.

For one, Singer has a deserved reputation, both in his investment business and in his politics, as a tough and aggressive hardball player. It challenges intuition that he would support a candidate in whom he does not sense some malleability toward an issue that is so extremely important to him.

The marriage issue is now in the same category as the Roe v. Wade decision, which legalized abortion. Although the Supreme Court decided in favor of it, those who morally oppose it will never stop fighting.

Does Singer detect in Rubio a conservative candidate who will not prioritize continuing the fight against redefining marriage? Singer is also interested in producing a Republican Party platform clean of references of support of traditional marriage.

Does Singer sense that Rubio will not put up a fight, allowing traditional marriage to be taken out of the GOP platform?

Unlike Ted Cruz, Rubio does not support amending the U.S. Constitution to protect traditional marriage. Rubio believes that definitions of marriage should be left to the states.

But let's recall the battle between Abraham Lincoln and Stephen A. Douglas about the expansion of slavery. Lincoln was opposed in principle. Douglas authored the Kansas-Nebraska Act, which provided that settlers could vote to decide if slavery would be legal in their new territory.

Douglas saw slavery as a local issue. Lincoln felt slavery was, in principle, inconsistent with the moral fabric of our free nation and something that could not be tolerated.

Does Sen. Rubio not believe that the institution of traditional marriage is sufficiently important and vital to the moral fabric of our nation that it should be protected and codified in our federal law?

He has stated, "It must be a priority of the next president to nominate judges and justices committed to applying the Constitution as written and originally understood."

The Republican Party is being damaged by some, such as Paul Singer, who believe they can call themselves conservatives while throwing traditions, vital for our nation and our freedom, into the trash.

Sen. Rubio owes it to those who see hope in him to clarify his conservative principles and whether he intends to fight for traditional values and traditional marriage.