Work on health care must go on

Obamacare did not change the basic structure of health care -- it built on realities that have been in place for years and are still in place. 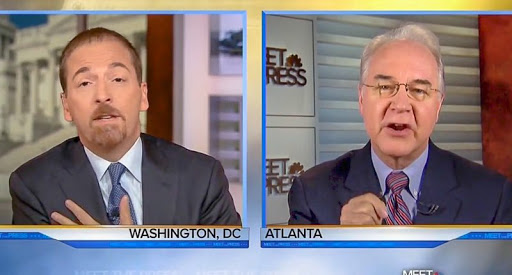 NBC's Chuck Todd started his "Meet the Press" interview with Secretary of Health and Human Services Tom Price with an important question.

Shouldn't we accept, Todd suggested, that it's "not Obamacare anymore, it's our national health care system. ...(Do) you accept that the attempts to repeal the Affordable Care Act as we know it are dead and now your job and the job of Republicans is to make the system work better?"

"...I don't accept the premise because we don't have a health care system. We have about five health care systems. You've got Medicare for seniors, Medicaid for those individuals who are low income or vulnerable or disabled. You've got the employer-sponsored coverage, where most individuals in the nation, about 175 million, get their coverage. You've got the VA system, and you have the individual and small-group market, where Obamacare focused its attention on setting up the exchanges."

And second, Obamacare did not change these basic structures. It built on realities that have been in place for years and are still in place.

Our employer-sponsored coverage system has its roots in government policy that started during World War II. Medicare and Medicaid were signed into law by President Johnson in the 1960s.

At the root of our health care problem is exploding expenditures and costs. This started happening well before Obamacare.

Let's recognize that it's not an option to stop working on health care reform. The problem is real and it's not going away. Maybe we should dial down the volume and stop trying to solve this huge, complicated problem in one piece of legislation. Maybe we should take on each of these five systems that Tom Price singled out and address their unique problems separately.

Government got involved in health care in big way to deal with the challenges of providing health care to the elderly and the poor.

When Medicare and Medicaid became law of the land in the 1960s, government spending on health care was less than one half of 1 percent of our GDP. Today it is 5.5 percent of our GDP and the Congressional Budget Office projects that in 30 years it will be up to 9.2 percent. Around 130 million Americans are now covered by Medicare and Medicaid, not much less than the number of Americans with private insurance.

How can we pretend that this can continue?

According to the Kaiser Family Foundation, in 2014, average health care expenditures for individuals over 65 were three times greater than for those between 35 and 44. In 1970, 9.2 percent of our population was over 65. Today it is 15 percent and CBO projects that it will be 21 percent in 30 years.

Health care expenditures will just keep going up in a society where people are living longer and having fewer children. Living longer is a good thing. Maybe we should be thinking about strengthening the American family and the values that encourage bringing children into the world.

We got Obamacare because Republicans didn't take care of the health care problems we already had. Let's not make the same mistake.