Alert: To be destroyed

At this very moment, a lefist mob in Washington, DC vows to topple the Emancipation Proclamation memorial tonight. Also, a Washington, DC politician vowed to remove it by law if it's not destroyed.

As you know, the Emancipation Proclamation was issued by Abraham Lincoln and declared that "all persons held as slave are, and henceforward shall be free."

It's a beautiful monument, paid for by freed slaves, as told by Marcia Cole, a member of the Female RE-Enactors of Distinction (FREED): 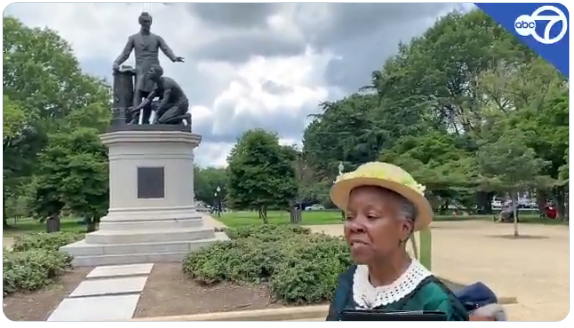 "People think of that figure as being servile. That man is not kneeling on two knees with his head bowed. He's in the act of getting up, his head is looking up, not bowed, because he's looking forward to a future of freedom. People have said 'Well, he's chained to Mr. Lincoln.' On closer look you will that while there is a shackle in his right hand, he is holding the end of a broken chain, which means he has taken his freedom. -- Marcia Cole"

We are watching the overthrow of our country when multiculturalists are able to topple both the statues of former slaveholders and those who fought to free the slaves.

Multiculturalists divide our country by race and differences and teach we should believe our nation is irredeemably flawed and evil because, they say, it was founded on the backs of enslaved people.

That's why they rewrite history in the media and in our schools to teach we should be ashamed of our nation and reject the ideals of the Englightenment that turned our country from a backwater into a collosus of technology, religious tolerance and economic liberty.

Multiculturalists only want power and it's why they must destroy the very root of what makes our country great.

These ideals that formed our unique country were based on a strange and new political philosophy to let people live their lives responsibly to pursue their own happiness. That is the process of becoming enlightened that our Founders wanted Americans to have. It is the American way of life.

To protect the American way of life, we must reject the muticulturalist vision that our nation is not worth saving. We must reject their lies that we're oppressed and unable to pursue a life of happiness unless they rewrite the rules.

And we must not allow multiculturalists to rewrite the rules. Multiculturalism is a totalitarian system built on intolerance, racism, censorship and lies, and cannot peacefully co-exist within a free society.

To protect freedom, we must protect the American way of life. That is the battlefield where I stand and fight, and I know you do, too.

I started CURE 25 years ago through the flames of the 1992 riots that destroyed my business. I woke up from the multiculturalists' lies that I was a victim and deserved everything government could give me, as long as I followed their dystopian rules that ignores natural law: don't work, don't save, and don't get married.

Multiculturalists have mesmerized our nation and have partially succeeded where they have rewritten the rules. We see the results in our distressed zip codes where in only 60 years they decimated the black family. Not even slavers could accomplish that.

Stand on the battlefield with me by backing my work at CURE to teach more Americans that our nation is worth saving with an immediate financial contribution of $100 or more.

Through our programs with clergy, legislators, and media -- including my new show "Cure America with Star Parker" -- we teach that living by the natural rules of life is not shameful.

We teach it's not shameful to have a government that does not stop us from looking at God, building a family, and building a business, but in fact encourages it.

The antidote to wicked multiculturalism is protecting the very thing they want to destroy: the American way of life.